Our Showroom is Open! For specific product listening , we require an APPOINTMENT. Items marked "AVAILABLE TO DEMO" are available in our store for audition. Please give us a call or email in advance for an Appointment.
Triangle Borea BRC1 Center Channel Loudspeaker (stock sale)Back to SpecialsELAC Uni-Fi Reference UBR62 Bookshelf Speakers with free LS80 stands until 11/28 (available to demo)
-47%

NOT AVAILABLE TO SHIP (PICK UP ONLY)

In the waning days of 2007, I delivered some small audio doohickey to John Atkinson one weekend afternoon. "Come down to the listening room," he said. "I want you to hear something." 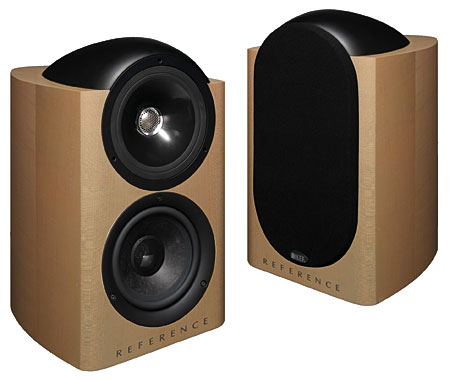 I forget now what he played me—a hi-rez recording of Cantus or Attention Screen, I'm fairly certain—but I remember what he played it through: the KEF Reference 207/2 loudspeakers he was reviewing for the February 2008 Stereophile. "Holy cow!" I said. "I've always admired KEF speakers, but this is a speaker I could actually be passionate about."

"Yes," agreed JA. "They are rather well sorted." Which is British understatement for Ooh-la-la!

A few weeks later, as several loudspeakers I'd lined up for review failed to ship one after another, our beloved editor had a suggestion. "I have the $6000/pair KEF Reference 201/2 Signatures in-house, awaiting review. They'd work a treat in your smaller listening room."

Burning lamps and sparks leap out
The KEF Reference 201/2 is a big stand-mounted monitor (16.4" H by 9.8" W by 15.9" D) that weighs 27 lbs. It has a top-firing port and a classic "canoe prow" profile. A KEF Uni-Q coincident tweeter-midrange drive-unit stands proud of the front baffle in a bulgy cowling that extends beyond the top of the cabinet. Beneath the Uni-Q assembly is a 6.5" low-frequency driver with a powerful motor that controls distortion with two Faraday shorting rings on the voice-coil formers.

The Uni-Q driver is Mark Dodd's variation on the coincident driver originally designed in 1987 by Laurie Fincham. This latest version better aligns the 1" titanium-dome tweeter to its surrounding 6.5" controlled-flare midrange driver, which functions as a waveguide, allowing a much more controlled acoustic wavefront. If you're interested in the details, including reference to Dodd's 2006 AES paper "Optimum Diaphragm and Waveguide Geometry for Coincident Source Drive Units," refer to JA's February review of the Reference 207/2.

On the sharp end of the speaker are three pairs of WBT terminations, allowing consumers to triwire (or passively triamp, I suppose) the 201/2s. KEF includes hefty OFC jumpers with bananas and spades so that consumers can use a single set of speaker cables or biwire (which is what I did).

Above the terminals are three gold-plated "switches" (hex-head bolts, actually) that can be removed to alter the "Uni-balance." One, designated LF, is designed to allow the speakers to be placed nearer to boundaries than with the Flat position. I found this somewhat helpful, since my smaller listening room necessitates that—however, I suspect that KEF's claimed 2dB of LF reduction is a tad optimistic.

Two HF switches permit four EQ options: Flat, +0.75dB, –0.75dB, and –1.5dB. Anal-retentive that I am, I kept going back to Flat because that is the proper audiophile response, but I really liked the air that +0.75dB gave my best-sounding acoustic recordings. I also liked being able to tone down some of the hot rock recordings being released nowadays, however—but that way lies madness.

KEF sells their own heavy Reference stands, which are 24" high and cost $500/pair, and to which the 201/2 can be directly bolted. But I had a pair of aggregate-filled 24" Foundation stands in-house, so I didn't audition the KEF stands.

The speakers are shipped with nice-looking protective grilles. Use them for all speaker-moving tasks (the chrome-plated titanium tweeters are protected by a screen, but still). Just don't listen to the Reference 201/2s with the grilles in place—they're mufflicious.

One idea sparks another
The Ref 201/2 was a lot more demanding of amplifiers than I had thought. My initial thinking had been Small room, smallish speaker, recommended power minimum of 50Wpc—go for an integrated amp. The two such amps I had to hand were the 100Wpc Portal Panache and the 60Wpc Ayre AX-7e. With both, the sound was quite good: natural, rich in the bottom, and extremely clear—but still no sparks. Then I installed my Musical Fidelity Nu-Vista 300 power amp and kicked the KEFs in the arse with some welly. Zzzzzzzt!

I'm not going to say you need to drop 200–300W into the system, but don't skimp on a power amp with the KEF. It hungers for juice.

Waiting for the spark from heaven to fall
Robert Spano's new recording of Brahms's Ein deutsches Requiem with the Atlanta Symphony and Chorus (CD, Telarc CD-80701) would be a daunting challenge for almost any stand-mounted loudspeaker, but, goosed by the Nu-Vista, the KEF Reference 201/2s simply nailed it. The huge chorus, the tonal colors of the orchestra, the sheer scale of the work—I've heard "reference" floorstanders that didn't deliver as much of the sound as the KEFs did.

The KEF was ready to deliver a lot more sound than my 9' by 15' by 7.5' listening room could handle—room compression factored in long before I achieved the Ref 201/2's rated upper limit of 110dB. No, I don't listen at those levels all the time, but when you take a car for a test drive at the track, you need to discover where it will spin out. The Ref 201/2 played loud and sounded good doing it.

It also had impressive bass for a stand-mounted monitor. It's true that it isn't perzackly small, but it's mighty. The taut basses and lower brass of Selig sind die Totem weren't simply deep, they were solid.

From the sublime to the sublimely ridiculous: I then listened to "Tuba Chant," from Michel Codard's Sous les Vo˚tes, Le Serpent..... (CD, M•A Recordings M048), which juxtaposes tuba with "percussion" that sound like the largest Tibetan prayer bowls I've ever heard—all recorded in the immensely reverberant space of Monasterio de la Santa Espina in Valladolid, Spain. The KEF 201/2s gave great physicality to the tuba, but the solidity that they imparted to the monastery's acoustic was even more impressive. The 201/2s could re-create a recording venue with uncanny detail.

The Reference 201/2s were also superb at creating the ungodly racket of a multi-horn front line, as evidenced by Roomful of Blues' eponymous first album (CD, Varrick VR035), which puts Duke Robillard's voice and guitar in front of an alto, tenor, and baritone sax, not to mention rollicking piano, bass, and drums. On "Give It Up," Preston Hubbard and John Rossi lay down a backbeat that baritone saxophonist Doug James nails to the floor with a repetitive series of honk honks as first alto saxophonist Richard Lataille, then tenor player Greg Piccolo, lay chorus after chorus on top. The KEFs gave James' bari convincing solidity and grit, while reveling in the timbral differences between Piccolo and Lataille—and it all came at me with the wham of an oncoming freight train.

Listening to a full-throttle sax section through the Ref 201/2s, I realized that the electric guitar wasn't as essential to early rock'n'roll's raucous roar as is commonly thought. Nothing says do the dirty rawk like a barrelhouse sax.

From a little spark may burst a flame
The speaker the KEF Reference 201/2 Signature most reminded me of was the equally ambitious Dynaudio Confidence C1 ($7000/pair), which I reviewed in the November 2007 issue (Vol.30 No.11). Since then, however, reviewing reality had set in, and the C1s had moved along to their next lucky reviewer. What I did still have on hand, however, was the Usher Audio Technology Be-718 ($2795/pair) I'd compared so favorably to the Dynaudio in the May 2008 issue (Vol.31 No.5).

You may think it unfair to compare a loudspeaker costing $6k/pair to one costing just less than half that, but only if you hadn't heard the Usher. Many speakers at twice the price would quake in their boots at the thought of being held to that standard. Indeed, the Be-718 did justice to the German Requiem's heft and dynamic sweep, although the KEF had more top-end air—especially with both HF screw caps installed (I did say I liked that on really well-recorded acoustic music).

The Ref 201/2 also gave more body to the moving rumble of the low strings and brass. I've noticed this effect at concerts: You don't so much hear low-end motion as feel it, and probably because it's a feeling and not a thought, the music is the more powerful for it. With the best-recorded sources, the KEF Reference 201/2 opened the portal for that magic.

Playing "Tuba Chant," the two speakers were far more alike than different. The Be-718s gave a very capable report of Valladolid's acoustic, and also the ghost-like tones of the gongs or Tibetan bowls or whatever it is Mark Nauseef is playing. On "A Black Dust Cloud, and Stars Embedded in Gaseous Nebulosities (For Carl Sagan)," however, the KEFs had more jump! Factor in some of Nauseef's struck cymbals. The Ushers did a superb job of conveying the timbre of the brass, and also the decay of the tones in the acoustic. What the KEF handled better—and to a startling degree—was conveying those transients' leap into existence. The 201/2 went from dead-black silence to full-tilt boogie with absolutely no hesitation or slop.

You think that's unimportant? Perhaps I did too, before I experienced it.

"Give It Up" also surprised me. The Usher gave Richard Lataille's alto sax a more nasal coloration than did the KEF. The Usher was impressive in its delivery of that stomping back beat and rhythm section, but the KEF simply rocked it a tad harder. Was that due to a superior ability to resolve incredibly tiny dynamic shifts, or was it part and parcel of the 201/2's ability to leap into action, or are they the same thing?

Don't know, and not sure I care. It was impressive and addictive, I'll tell you that.

Kindled by unexpected sparks
In addition to being drop-dead gorgeous, the KEF 201/2 is phenomenally well built. Its curved cabinet is sexy enough that you just might find yourself stroking its flank—if not surreptitiously patting its fanny. Fit'n'finish are exceptional.

And the 201/2 is properly thought out, as well. I heard no problems from that coincidentally mounted tweeter and midrange, and I was listening for them. There was no "cupped hands" coloration, and the handoff from midrange to tweeter was seamless. Then there are the EQ "switches," the effects of which were subtle but effective. Matching the 201/2 to your system, room, and taste should be simpler than with most speakers.

I don't have any caveats, other than suggesting that it's hard to have too much power for the KEFs—they want, need, and require juice, and lots of it. I suppose some will criticize the Reference 201/2 Signature for its price of $6000/pair. That is a lot of money for a stand-mounted monitor, but its performance suggests that KEF put a lot into the 201/2. What that's worth to you would be impossible for me to predict.

What I also couldn't have anticipated was how much, ultimately, I responded to the Reference 201/2 Signature. It's a truism that no transducer is perfect, but the 201/2 Signature is an absolute gem—if not flawless, then damn close.